With an ever expanding choice of smaller cruise ships on the market, from small luxury vessels to far flung river cruisers; from expedition voyages to coastal sailing holidays, the opportunity to find the ‘right cruise for the right customer’ is better than ever! Customers that are ‘new to cruise’ and who are used to land based holidays will no doubt be keen to explore the non ship experiences just as much as the vessels facilities. For those who seek a holiday with culture and historic sites at its heart, then the list below are all UNESCO World Heritage sites that have cruises that can be taken to visit them!

1) Gerianger Fjord, Norway – The UNESCO-protected Geirangerfjord is surrounded by mountain peaks, stunning waterfalls and lush, green vegetation and the entire 15km length of the fjord is breathtaking. Cruising with Hurtigruten, an optional excursion will take you to Geirangerfjord.

2) Diocletian Palace – Split, Croatia – In the heart of the Adriatic the rugged Dalmatian coastline is home to the majestic city of Split where the ancient remains of the Diocletian Palace can be found. Erected during the 4th century AD for the Roman Emporer Diocletian it still stands today and forms half of the ‘Old Town’ and is utterly spellbinding to walk through! A Croatian Coastal Cruise with eWaterways from Split is the perfect way to see this incredible historical complex.

3) Seventeenth-Century Canal Ring Area of Amsterdam, Holland. The canal district of Amsterdam was built at the end of the 16th and beginning of the 17th centuries when the city was extended from the original fortified town by draining the swamp land using a system of canals in concentric rings. Today Amsterdam is a vibrant and modern city and the starting point for many river cruises on the Rhine river. Pre cruise options include an overnight in Amsterdam and river cruises with Amadeus River Cruises start or finish in Amsterdam.

4) Champagne Hillsides, Houses and Cellars, France. In the 18th and 19th centuries, Reims and Épernay were entirely built on the wine-growing activity of Champagne and became the benchmark method of producing sparkling wine. The production process specific to Champagne is based on fermentation in the bottle and remains largely unchanged to this day! A fabulous way to experience this incredible area is on board a luxury hotel barge such as the Johanna as she cruises along the Marne river passing quaint villages and towns, including Epernay, where the main Champagne houses are found. 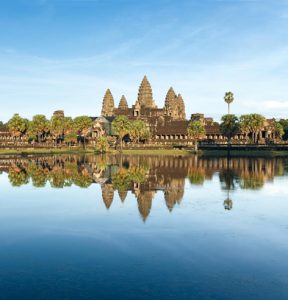 6) Angkor Wat – Siem Reap, Cambodia. Angkor Wat is one of the most important archaeological sites of Southeast Asia. It extends over approximately 400 square kilometres and for several centuries was the centre of the Khmer Kingdom. The architecture of the temples are filled with symbolic significance and are highly artistic and a wonder to behold. Mekong River Cruises starting or ending in Siem Reap, such as those offered by Mekong Prestige II, provide guests with the opportunity to visit this incredible ancient kingdom.

7) Sub-Antarctic Islands, New Zealand. The Sub-Antarctic Islands consist of five island groups (the Snares, Bounty Islands, Antipodes Islands, Auckland Islands and Campbell Island) in the Southern Ocean south-east of New Zealand. The islands have an incredible level of wildlife and are famous for the diversity of seabirds and penguins that nest there and of the 126 bird species found here, five breed nowhere else in the world. PONANT Yacht Cruises offer luxury expedition cruises to this remote destination.

8) Traditional Houses of Shirakawa-go and Gokayama, Japan. For travellers seeking the exotic appeal of diverse cultures, individual yet international, Japan is bound to tick all the boxes! With the UNESCO World Heritage sites of the traditional houses in the gassho-zukuri style, both Shirakawa-go and Gokayama can be visitied from the port of Kanawaza. The ‘Heart of Japan’ cruises with PONANT offer excursions to these fascinating villages.

9) Dubrovnik, Croatia. This stunningly intact walled city on the Adriatic Sea in the south of Croatia and is one of the most famous tourist resorts of the Mediterranean and listed as a UNESCO World Heritage Site since 1979. Playwright, George Bernard Shaw is quoted as saying “If you want to see heaven on earth, come to Dubrovnik.” High praise indeed! Many small ship cruise companies start or finish their coastal cruises in Dubrovnik – such as Sea Dream Yacht Club.

10) Budapest, the banks of the Danube, Hungary. As one of the world’s outstanding urban landscapes, this stretch of the Danube has had human settlement since the Palaeolithic Age! It was the site of the Roman city of Aquincum, which comprised of two separate cities: Buda on the right bank and Pest on the left bank and it was not until 1873 that the two separate sites become one as ‘Budapest’. Danube river cruises are always popular and many of the river cruise operators include an overnight stop in Budapest, such as aROSA River Cruises on board the aROSA Donna and aROSA Silva.