The best way to explore Australia’s land of ancient wonders, the Kimberley, is on the water aboard a Ponant cruise

Australia’s untouched Kimberley is almost as old as the Earth itself. A secret well-kept by fishers, prospectors and cattle ranchers for decades, it’s a relatively new region for adventure cruising, explored only by more intrepid travellers over the past 30 years and a place best enjoyed on a Ponant cruise.

Ponant takes you along the most spectacular coasts in the entire region with landings designed to explore its beauty. You will have opportunity to explore the exquisite rock art depictions that some researchers believe could be at least 50,000 years old. Staring at them, you can imagine the ancient people who came here and painted these intricate murals.

Prehistoric animals, ornately attired hunter figures and mysterious deities of unknown origin all adorn the bare rock face; standing testimony to the tribes who once lived among these rough canyons. Weathered by aeons of rain, wind and sea spray.

Travel companies often use the term ‘pristine wilderness’ to describe somewhere away from the souvenir sellers and taxi touts of the world’s over-crowded tourist traps. But in the remote Kimberley region of Australia’s North West, you can be assured that its pristine wilderness is exactly that. 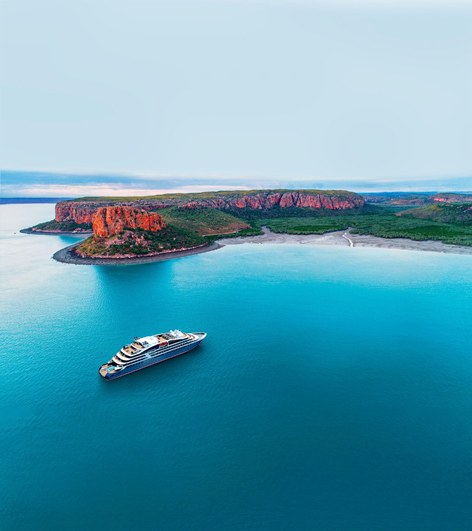 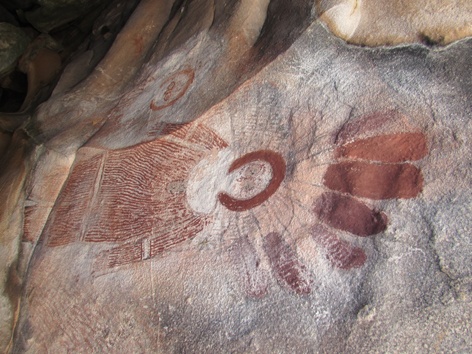 Why the Kimberley is Australia’s top adventure cruising destination

The Kimberley has been voted the top adventure cruise destination for Australians and is quickly establishing itself as a ‘must-do’. A secret well-kept by fishers, prospectors and cattle ranchers for decades, it’s a relatively new region for adventure cruising, explored only by more intrepid travellers over the past 30 years.

“The Kimberley is one of the most ecologically diverse areas in the world,” says former Chief Scientist of Western Australia, Professor Lyn Beazley AO. “Its biodiversity and marine ecosystem are among the world’s most pristine. The tropical savannahs of the region are the only near-untouched such landscapes left on the planet.”

While you can probably name several well-known cruise lines that regularly visit the Kimberley region, you might be surprised by the new breed of luxurious small ships coming to the fore, offering comfort and sanctuary in a harsh environment. No other cruise line exemplifies this genre of modern, responsible travel better than Ponant.

Check out the itineraries on offer with Cruiseco here: 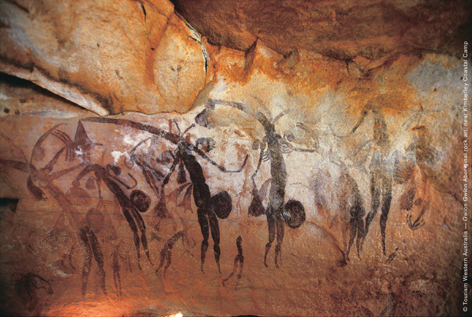 Explore the Kimberley on one of the world’s most modern and comfortable expedition cruise ships.

In 2018, Ponant responded to the urging of its many repeat guests and launched the first of its new Explorer-class ships, which are designed for adventurous voyages to remote or challenging destinations – including the sought-after Polar regions. These new vessels, of which a total of six are planned, are slightly smaller and more agile than the current fleet and have a raft of adventure-specific features such as an innovative underwater viewing lounge (the ‘Blue Eye’), as well as kayaks and paddleboards.

Le Lapérouse, the lead ship of these new Explorer-class vessels, offers adventurer cruisers the opportunity to explore one of the world’s most rugged and untouched coastlines in utmost ease and luxury.

Dedicated by Ponant to cruising the Kimberley, Le Lapérouse has a guest capacity of just 184, ensuring you’ll be free from crowds and hassle. Excursions take place aboard sturdy Zodiac runabouts, with just a handful of passengers in each boat and an expert interpreter to guide your experience. The vessel features two gourmet restaurants, with menus devised by world-renowned chef Alain Ducasse, and a comprehensive wine cellar, plus two lounges, an outdoor bar, theatre and spa.

Le Lapérouse also has a reasonable-sized swimming pool on board. This is much appreciated when you’re craving a relaxing dip in the sun, because swimming in the waters off the Kimberley coast is not possible due to the abundance of saltwater crocodiles (a fact that will soon become clear as your expedition guide points out the big reptiles populating the riverbanks).

Another clever feature of these new Explorer-class vessels is the hydraulically-retractable marina at the stern, where Zodiac tenders are embarked and disembarked. Climbing in and out of tenders can be a nerve-wracking process for less mobile guests, even in the relatively calm waters of the Kimberley. But this versatile accessory simplifies the procedure considerably, making the overall experience more stress-free and enjoyable. 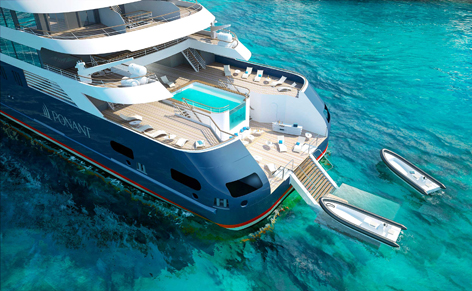 With 30 years of maritime experience, Ponant is at the forefront of small ship cruising – its gleaming, futuristic vessels are equipped with the most advanced technological and environmentally sensitive tools. Guests can expect to receive a supremely comfortable voyage in luxurious surroundings akin to a 5-star hotel.

Excursions take place aboard sturdy Zodiac runabouts, with just a handful of passengers in each boat and an expert interpreter to guide your experience.

Ponant is also well known for its gastronomy, with menus devised by world-renowned chef Alain Ducasse. There’s also a comprehensive wine cellar aboard every ship, overseen by a knowledgeable sommelier. To bolster the luxury, indulgent spa treatments can be enjoyed after a conscience-cleansing workout in the gym.

Away from the crowded, commercialised ports, Ponant vessels are designed to reach remote, otherwise inaccessible locations with ease. They’re large enough to provide space and privacy for those on board yet, each state-of-the-art vessel is also small enough to venture where megaships can never sail. 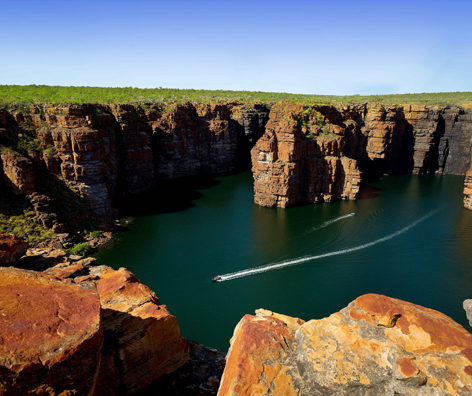 Ponant’s Iconic Kimberley itinerary is one of the most comprehensive offered by any major cruise operator. In 2020, 11 back-to-back 11-day voyages will take place between May and September, with a different set of excursions every day. The Hunter River, for example, is one of the most picturesque landscapes in the Kimberley, where wild mangrove forests are home to abundant bird species.

Travel companies often use the term ‘pristine wilderness’ to describe somewhere away from the souvenir sellers and taxi touts of the world’s over-crowded tourist traps. But in the remote Kimberley region of Australia’s North West, you can be assured that its pristine wilderness is exactly that.

“The high point of this voyage,” says veteran expedition leader Mick Fogg, “will undoubtedly be our exploration of the King George River and its majestic twin falls, the highest in Western Australia.

“We also visit Collier Bay, the site of the mysterious Montgomery Reef, where the entire marine ecosystem appears to rise from the sea with the falling tide like a re-appearing Atlantis.”

Throughout each journey, Le Lapérouse will traverse one of Australia’s most ancient and awe-inspiring coastlines. The Kimberley’s spectacular waterfalls, stark gorges, vast savannah and desolate mountain ranges are all waiting to be explored by one of the world’s most modern, luxurious expedition cruise ships.

A visit to the Kimberley is, in every sense, a giant step back in time to a land almost unchanged since dinosaurs roamed these parts. In fact, with a keen eye, you might just spot one. 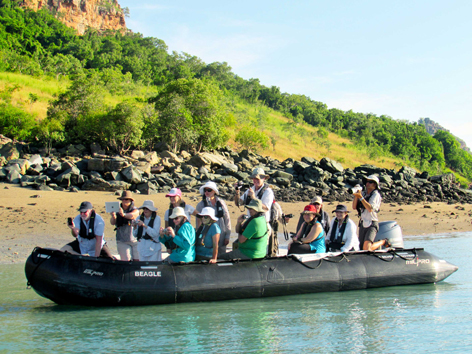 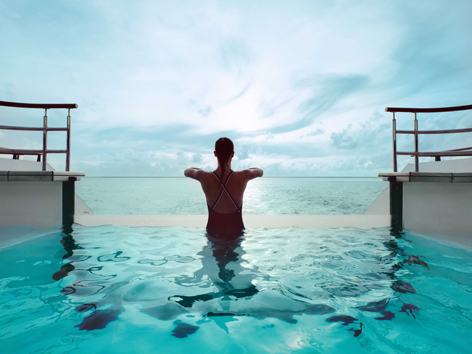