A Mediterranean menu onboard Celestyal Cruises

Immerse yourself in Greek culture with al fresco dining to rival the local’s.

Celestyal Cruises explores the Mediterranean and the Aegean with two ships—Celestyal Olympia and Celestyal Crystal—and both dip into Greek culture like pita into tzatziki. As one can imagine, being immersed in Greek culture means food plays a major role in almost all onboard and onshore activities.

The Celestyal dining is most appetising, with a cornucopia of Greek, Mediterranean and other international fare. An al fresco feast of fresh seafood is a highlight. And make sure you come early to the Greek barbecue on the pool deck, as you will want seconds.

We learn to cook Greek-style too, as Chef Alexeandros takes us through the fine art of preparing Myconian dakos, Santorini fava and feta parcels. Cooking classes are always popular on cruises but the crowd gathered for this lesson could fill Delphi Stadium. We even learn how to create a Greek mojito skinos, which proves an ideal accompaniment to the snacks.

The bars have a fulsome range of more-than-acceptable Greek wines and signature cocktails, starring the far-too-tempting Skinos Mastiha Sour. There’s plenty of ouzo, which can be tricked up into an ouzotini, if preferred. And after three, you will. There are obscure, hard-to-pronounce Greek liqueurs too, such as tsipouro, rakomelo, tentura and koum kouat, which I sample, just to get into the spirit of things.

Drinks packages are a standard inclusion on Celestyal Cruises and the ‘Eclectic Aegean—Turkey & Greece’ cruise package also includes three shore tours at no extra cost: Bosphorus Cruise and the Spice Market in Istanbul, Oia village on Santorini and the Palace of Knossos on Crete.

Aside from the mouthwatering meals, there is a joyous feel to this ship. Bouzouki music pumps through the ship’s speakers (don’t worry, it grows on you) and the passengers adore it. The distinctive instrument’s rapid, metallic notes resonate throughout this cruise and are the soundtrack to our drinks, dinner, dancing and destinations.

Enjoy a unique dining experience on the world’s most stunning shores. 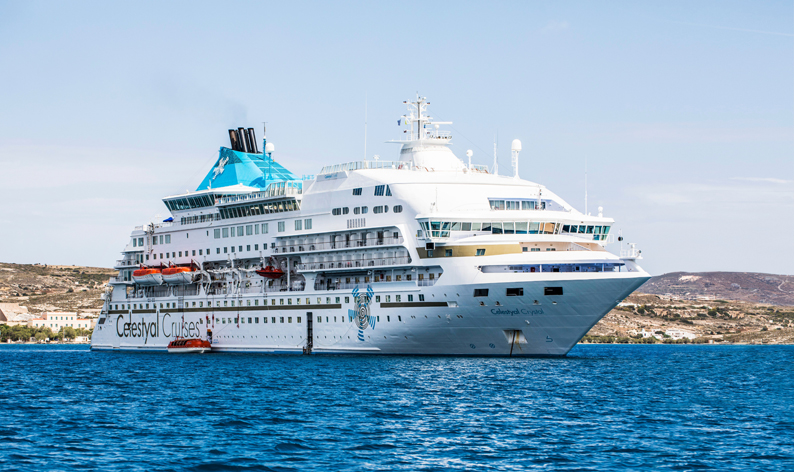 With a ship as Greek as the Acropolis and an itinerary as full a stuffed dolma, this Celestyal Cruises voyage around the eastern Mediterranean ticks every cultural box.

Celestyal Olympia and Celestyal Crystal both host a 13-night ‘Eclectic Aegean—Turkey & Greece’ package which begins with a three-night pre-cruise stay at the Hera Boutique Hotel in Athens and a guided city tour and ends with a three-night post-cruise stay at the Hydroussa Hotel in Hydra. In between, the seven-night Celestyal Crystal cruise makes port in Istanbul and Canakkale (for a trip to Gallipoli) in Turkey; and Volos, Crete, Santorini and Mykonos in Greece.

Within a few hours of departing Athens, everyone is on board with being Greek. Each port brings adventures in cuisine, photo opportunities and shopping, as well as sights, sounds and smells too numerous to list. Nevertheless, there are a few not-to-be-missed highlights. Such as cruising into the spectacular Santorini caldera and then visiting a winery (Venetsanos is excellent) to try a local Assyrtiko white. And the ruins of the Minoan Knossos Palace on Crete, followed by a meal in Heraklion, where the bougatsas, dakos and loukoumades are to die for. And wandering the whitewashed alleyways of Mykonos to get a selfie with the island’s best-known resident, Petros the pelican.

Between ports, the onboard revelry continues apace. At an uproarious dance class, we learn the sirtaki, made famous in the movie Zorba the Greek. And while there is no Anthony Quinn and definitely no plate smashing (this isn’t really a thing), we exuberantly link arms and tackle the steps, which accelerate with the rising beat of the famous mandolin and bouzouki duet. Toes are trodden on, apologies accepted and laughter abounds until the end of the dance is signalled by the traditional cry of ‘Opa’.

I suspected I had made a goose of myself at the dance class and this was confirmed when I watched the shows in Muses Theatre, where full houses see the dances done properly. More colour, more delight, more bouzouki. More Opa!

This is a slightly different style of cruising than Australians may be used to. Don’t get me wrong, Celestyal still has all the staples—teak decks, a pool and Jacuzzi, live music, a nightclub, video arcade, casino, photo shop, library, children’s playground, sports court, sauna, gym, day spa and gift shop—but cabins with a balcony are limited; and instead of long, languid days at sea, you get regular port stops and a plethora of cultural festivities.

If you want a full-on Greek immersion, in all its fascinating diversity, history and merriment, then eureka, you’ve found it. 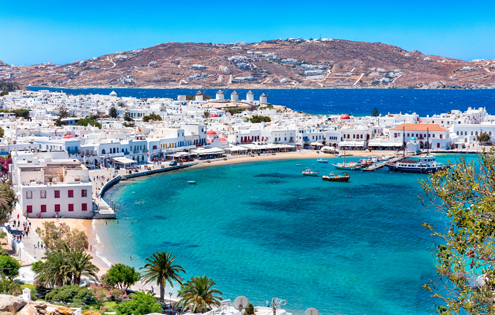 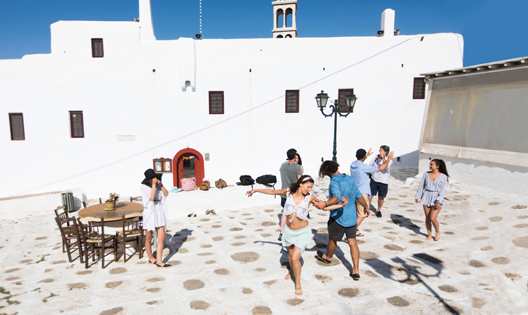